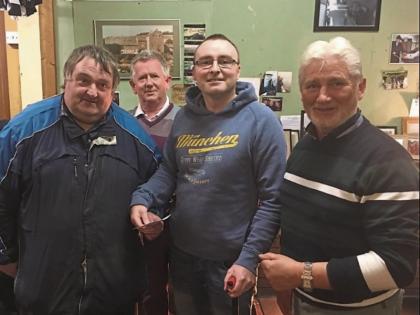 THE ONLY Limerick man in Croke Park not roaring with pleasure at the end of the Limerick-Cork All-Ireland semi-final in 2018 was Mark (Markie) Noonan.

Instead, he was roaring in excruciating pain.

“My symptoms became more severe, including my back going off-line which in turn started affecting my walk; numbness in my hands and feet; bladder issues; pins and needles in my hands; night sweats; not sleeping; twitching; uncontrollable shakes; no energy; fatigue; memory loss; earaches; lock jaw; nausea; joint pain and inflammation in the body.”

But nobody could tell Mark, from Banogue, what was wrong. Up until 2017, he was fit and healthy. Mark played GAA, soccer, went cycling, running and mountain climbing but all that changed abruptly when his symptoms appeared.

It took a year and a half - January 2019 - to get a diagnosis. Mark has Lyme disease. It is a bacterial infection, transmitted to humans by the bite of an infected tick.

GAA clubs are like an extended family and Bruree GAA wasn’t going to forget about one of their brothers. Brendan Hogan, club chairperson, said they wanted to do something to help Mark out but due to Covid, fundraising opportunities have been limited.

“November is a month to highlight men's health so we thought Movember (growing moustaches for the month) would be a great opportunity. It was suggested in our players’ WhatsApp group and since that message went out over 60 members have all committed to doing Movember or no shave November,” said Brendan. Family and friends have also rowed in behind Mark.

Other ideas are virtual walks or runs - people donate in proportion to how many miles they walk or run in November; online charity auction; virtual quizzes; birthday fundraisers on Facebook and a coronavirus jar - family or workmates give €1 every time the c word is mentioned. Or simply donate to the GoFundMe page - November Challenge & Help Mark beat Lyme.

Lyme disease is currently the fastest growing vector-borne disease in the world. The bacteria is shaped like a corkscrew which enables it to burrow through body tissue which most other bacteria wouldn’t be able to penetrate.

Mark doesn’t know where he picked up the tick. He thinks maybe on one of his mountain climbing excursions. Sometimes people see a rash after the tick bite but Mark didn’t have any.

What he does know, sadly, is the effect it has had on his life.

“My symptoms are very debilitating which make me unable to work. I have to use crutches constantly and I’m unable to sit for long periods of time. I have been out of work since the end of July 2018, due to having chronic Lyme disease. I had been working with the same company for 15 years. It is very disheartening not being able to work or do anything,” said Mark.

At least he knows now what the issue is. For a year and a half he didn’t know what was wrong.

In January 2019, Mark could feel he was getting worse.

“My walk started to completely go due to weakness in my legs. I was in bits and felt broken with no place to turn to. I had so many questions and no one could give me an answer.

“Finally, in mid-January 2019, my GP completed another detailed blood test and this time I received the answer - I had Lyme disease. At last I had my diagnosis. I was then referred to an infectious disease specialist in Dublin and received my appointment five months later.

“Before my visit to the specialist, I was advised to send my bloods to Germany as ticks can carry numerous infections. I was then diagnosed with chronic Lyme disease with nine additional infections. I then commenced my treatment of triple antibiotics and supplements. I knew this road would be a long one and I was willing to fight it all the way,” said Mark, who has been attending the specialist in Dublin since May 2019.

“I knew I could not stay on antibiotics long-term. My specialist has advised me to start on herbal antibiotic protocol with a Lyme literate herbalist in Scotland and return to the infectious disease specialist in March 2021.

“I have seen a very slight improvement over the last few months. Every day is a struggle but I have tried to remain positive throughout all of this with the help of my fiancée Irene, family, friends, GAA community, former work colleagues and everyone I have met along my journey. Thank you all so much for your support, it means the world to me,” said Mark.

Any monies raised will go towards further treatments for Mark’s battle with Lyme disease. Click here to donate.