After analysing the anonymous medical records of 8.4 million people from across the UK, scientists forecast that the total number of Lyme disease diagnoses in the UK could top 8,000 in 2019, compared with previousestimates of between 2,000 and 3,000 annual diagnoses.

Lyme disease is a bacterial infection, which is passed on through being bitten by an infected tick. The small spider-like creatures feed off the blood of animals and are typically found in dense, moist vegetation. 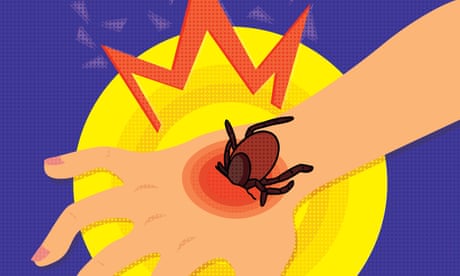 Lyme disease: is a solution on the way?

Lyme disease has many symptoms, making it difficult to diagnose. Early symptoms can be similar to those of flu, and about a quarter of cases will develop a circular red rash around the bite. Full clinical diagnosis requires a blood test, but the study found that more than half of patients in 2012, the most recent year with complete data, were treated with only “suspected” or “possible” Lyme disease.

If caught early, most cases can be successfully treated with antibiotics within four weeks, but the infection can lead to permanent damage to the joints and nervous system.

The research, published in the journal BMJ Open, found that half of cases occurred between June and August. Although there were diagnoses across all regions of the UK during the period studied, Scotland had the highest number of cases, at 27% of the total. The authors suggest this could be due to the region’s wetter climate and popularity with hikers. The south-west and south of England also recorded a higher than average number of cases.

The data showed that the number of diagnoses increased almost tenfold over the period studied. This, the researchers said, was partly down to increased caution by GPs and greater public awareness.

“The exact number isn’t so important,” said Dr Victoria Cairns, the lead author of the study. “The point is that it’s a lot, and it’s everywhere, and that’s why people should be informed.”

Dr Anne Cruikshank, the Royal College of GPs’ clinical champion for Lyme disease, said: “These levels are not a big surprise to those of us who know about Lyme disease. I expect the 8,000 figure may be an underestimate, since the data shows that positive lab results have doubled every five years.”

Dr Jack Lambert, a professor of medicine at the Mater hospital in Dublin, agreed. “I think this is the tip of the iceberg, but this paper is a good step.”

Cairns said she hoped the new data would encourage the public to take more preventive measures, and bring about faster diagnoses. “The main thing that should come out of [this work] is to be on the alert. There’s no need to panic, the treatment works – but if you don’t get it in time you might have some long-term problems.”

To avoid being bitten:

If you find a tick: